WHAT MAKES A GOOD AD?
There are three schools of thought.
The cynics hold that a good advertisement is an advertisement with a client’s OK on it.

Another school accepts Raymond Rubicam’s definition. The best identification of a great advertisement is that its public is not only strongly sold by it, but that both the public and the advertising world remember it for a long time as an admirable piece of work.

I have produced my share of advertisements which have been remembered by the advertising world as admirable pieces of work,but I belong to the third school, which holds that a good advertisement is one which sells the product without drawing attention to itself.

It should rivet the reader’s attention on the product. Instead of saying.
What a clever advertisement, the reader says, I never knew that before. I must try this product. 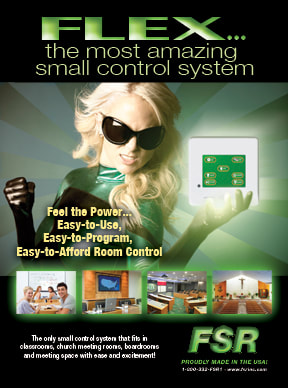 The client needed an impactful image  be used in all visual applications for FSR’s Flex-LT,  a self-contained room control system. The device is designed primarily for non-technical users in classrooms and meeting rooms. It provides an easy-to-use color touch screen that controls any source being displayed including volume, lights, shades or movie screen.

To illustrate the cutting edge appeal of the Flex-LT, he used the theme of the currently popular superhero movies.This brings a certain excitement to the product while also portraying the teacher in the ad as a superhero. Also the green color scheme ties in with the whole “green” concept that is so popular these days. And, of course, one of the key selling points of the product is that it conserves energy. The Flex is placed where it is looks like it is one of the tools in the Flex-Woman arsenal for teaching. The concept of a superhero is also perfect for tradeshow applications in that it can be expanded upon in a variety of ‘showstopping’ ways.”
DESIGN NOTES ON CREATING THE 3D INVASION AD FOR PROJECTION DESIGN 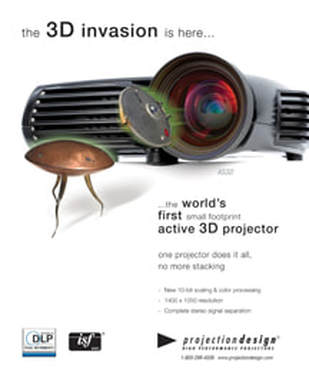 The challenge was to create an eye catching and engaging ad for a ground breaking active 3D projector,
the first to be produced in a compact size.

The client supplied the headline "the 3D invasion is here." From this starting point, we determined that the best way to portray the 3-dimensional aspect and tie it into the campaign slogan was to use "alien space craft” coming out of the projector’s lens. This concept suggested the many 3D films that feature science fiction, animation, and horror. The alien images were produced from stock footage allowing the project production costs to be well within budget.