Theatrical Event Design is one of the most exciting things to do when you are a graphic designer.

This is where you get to brainstorm with other creatives on the deepest meaning of the
play and how to create a graphic that essentially embodies the entire show in one image. 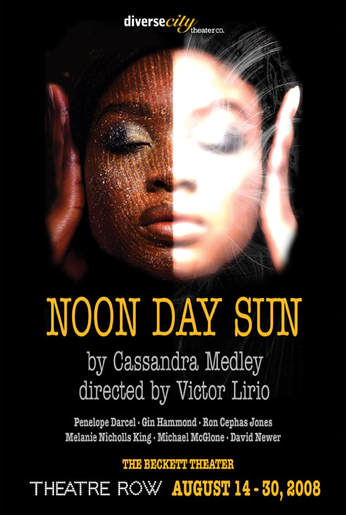 "Noon Day Sun" is an award winning play that chronicles the journey north of an African-American woman in the 1950's,
her challenges for a better life and attempt to "pass" for white.
The goal was to design promotional materials that would reflect both aspects of the lead character's existence.

After an in-depth conversation with the company's artistic director and much consideration of the underlying story line, we arrived at the idea of the split woman. The original image was solely that of a black woman. By adding tribal scarification features to the right side of her face, she became more symbolic of Africa.  Photoshop technology was used to make half of her face seem white.  It also added clouds of swirling light to reflect the fact that this part of her life was somewhat of a dream. The show opened to critical acclaim by the NYC theater community and was nominated for multiple awards.
DESIGN NOTES FOR "SANTA CLAUS IS COMING OUT" 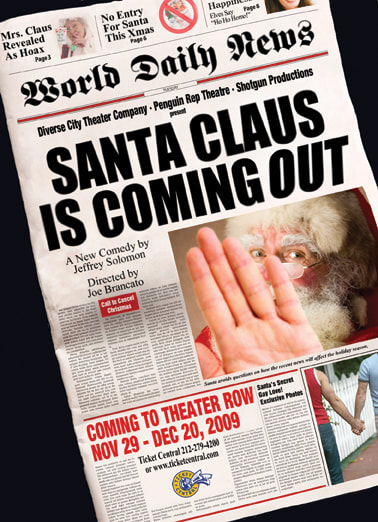 D2 Studios served as the Advertising and Creative Director of this hit Off-Broadway play.
The challenge was to create a major ad campaign that would convey the public’s shocked sensibilities if the holiday icon
was discovered to be gay. We were also responsible for creating most of the projections and miscellaneous props for this production.
We worked closely with the noted Broadway marketing agency HHC Marketing preparing and trafficking the ad materials.

The play is about sexuality, not about sex, so it was important that no suggestive images were to be used in the ad campaign.
The concept of newspaper headlines was suggested as the best way to convey the immensity of such an announcement.
This strategy was reflected in the projections used in the play as well as the program. We also created a “show logo” to be used on promotional items and for web advertising where the main image would be too small or complicated.