Over the years D2 Studios has been an integral part in promoting
world-class concert events.

From concerts featuring Broadway Stars to performances of classical and contemporary music
all have to be directed at attracting and selling tickets to concert goers. 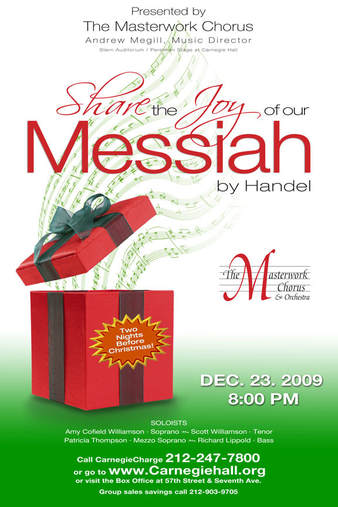 After over 10- years of using the same artistic elements to market and advertise their annual Messiah concert at Carnegie Hall,
this organization decided it was time for a new branding look. D2 Studios was also asked to design the packaging for their CD,
“To Hear the Angels Sing”.

Independent market research showed that most tickets for holiday events are purchased by women.
They are considered as much a family gift as any packages placed under a tree.
Therefore, we chose to give the ad campaign a gifting theme and used traditional holiday images
and musical notes to reach a broader audience.
DESIGN NOTES ON THE "SUITES BY SONDHEIM" CONCERT AT LINCOLN CENTER 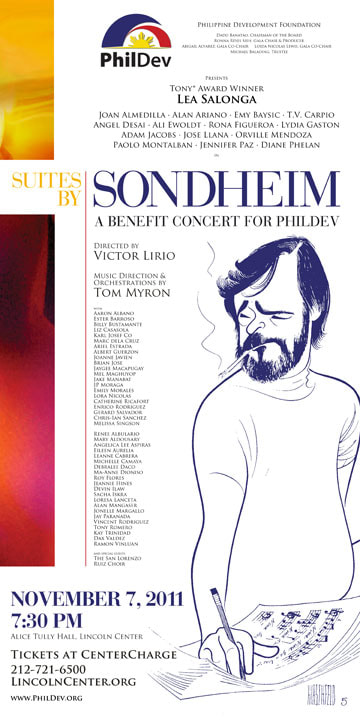 D2 Studios was commissioned to design all marketing materials for this high visibility concert including
posters, postcards, eblasts, web marketing and the event program.

After discussing the concert and its goals in-depth with the director we decided to use the iconic drawing of Sondheim
by Hirshfeld. While this has been used extensively in recent times we came to the conclusion that we could benefit by
branding our concert with the same image. The colors used in the graphics are similar to the color in the Phil Dev logo
which itself is tied into the color of the Philippine flag.

Working with an international team of marketers we developed an additional brand image featuring the photo of the
Tony Award Winning featured star of the show Lea Salonga with the understanding that her name would draw
as much attention to the concert as the Sondheim repertoire.